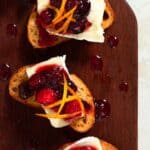 We all need to take a little time off from the kitchen once in a while during the holiday season. All of the baking, mixing cocktails, and whipping up creative appetizers can really take it out of us!

Thankfully, this Cranberry Brie Crostini Appetizer is SO easy to make! It’s made up of 3 simple elements:

All 3 elements can be made days ahead of time and even assembled a few hours before it’s time to eat. It’s the best appetizer to serve when you want to stay out of the kitchen and have fun at the party for once.

This creamy and tart snack would pair so nicely next to a Winter Meat and Cheese Board and this playful Cranberry Gin Fizz. With these tasty treats in attendance, guests will be talking about your party for months!

Small appetizer, BIG flavor. Head to the farmer’s market or grocery store to pick up this small list of fresh and flavorful ingredients:

Guess what? Making cranberry sauce from scratch is actually really easy! All you need are fresh or frozen cranberries, sugar, and a handful of herbs and seasonings to really give it a flavor boost. Mix them all together, bake, and enjoy!

If you can, use the freshest of ingredients when making cranberry sauce. That means freshly squeezed orange juice, fresh nutmeg, cinnamon sticks, and fresh rosemary. It’s definitely the best way to go.

I like to make homemade cranberry sauce all throughout the holiday season for crostini appetizers, to top of baked brie, or as a simple flavor bomb next to the Thanksgiving turkey.

Brie is truly one of my favorite cheeses. It’s a soft cow’s milk cheese from France that has a bloomy edible rind on the outside and a heavenly creamy center on the inside. A wheel of baked brie is delicious for dipping or you can keep it chilled to slice for cheese and meat boards and crostinis.

Pro tip: Pop the wheel of brie in the freezer for at least 15 minutes before assembly. The cheese is much easier to slice when it’s firm and chilled.

If you aren’t a huge fan of brie, camembert cheese, whipped ricotta, or another whole creamy, bloomy cheese like Mt. Tam work as delicious substitutes.

If there’s one thing you need to know how to make before the holiday season arrives, it’s crostini. These crispy pieces of toasted baguette are incredibly easy to make at home, store well on the kitchen counter and can be topped with radishes and butter, tomatoes and basil, or anything else you like. Also, who can resist that delicious crunch?

The better quality bread you use, the better the crostini will taste. My preference is Trader Joe’s sourdough baguette but a French or whole wheat baguette will also work in a pinch. The baguette is sliced into rounds, drizzled with olive oil, then lightly toasted until they’re golden brown and crunchy.

How to make cranberry brie crostinis

These steps are SO easy! Whip the brie crostinis up in minutes, pass them around, and get back to partying. Here’s how it’s done:

Step 1: Toast the crostinis and let them cool.

Step 2: Mix the cranberries, sugars, orange zest/juice, rosemary, salt, and pepper together in a bowl.

Step 3: Add the cranberry sauce mixture to a baking dish.

Step 4: Bake the cranberries until they burst.

Step 5: Place a slice of brie on the crostinis, add a spoonful of homemade cranberry sauce on top, and enjoy!

Customize and enhance the flavors

This easy party snack already has bursts of holiday flavors but these can always be customized or enhanced. Once they’re assembled, feel free to top the brie crostinis with:

Talk about a flavor bomb!

Can you make them ahead of time?

Absolutely! ​​This is one of the best make-ahead cocktail party appetizers. Follow these tips before it’s time to party:

Tell me what you think!

So, are you going to make these delish bites for your next holiday get-together? Yeah, you are because you're awesome!

When you do make these Cranberry and Brie Crostinis, let me know what you think and make sure to share a pic on Instagram and tag me @cupofzest! 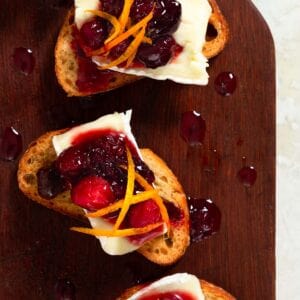