Party appetizers do not come much finer than this Baked Brie with Caramelized Onions in Puff Pastry. Featuring melted double cream brie, herb-infused caramelized onions, and puff pastry, it’s a rich and savory treat that everyone at the party will want to devour.
No ratings yet
Prep Time 30 minutes
Cook Time 45 minutes
Rest Time 10 minutes
Jump to Recipe Leave a Comment 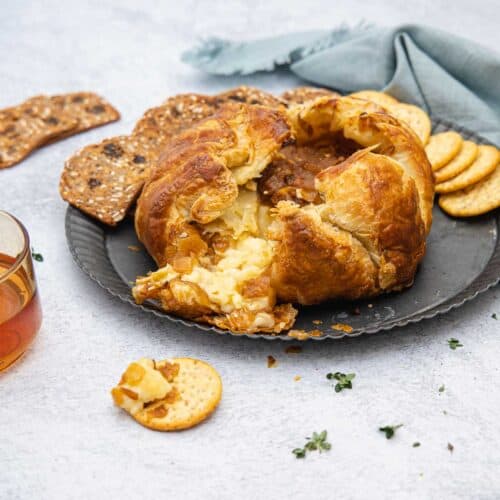 It’s entirely possible that this Baked Brie with Caramelized Onions in Puff Pastry is my new favorite. And that’s saying something! After all, it’s really hard to compete with my Baked Brie with Apricot Preserves and Crispy Prosciutto and Baked Brie with Fig Jam and Pistachios.

What sets this savory baked brie apart is the blanket of flaky, buttery puff pastry surrounding the cheese. Also known as “brie en croute”, the pastry is what keeps the caramelized onion-topped cheese intact while it all bakes together.

When it’s done, there’s a little bit of everything in each bite: crisp pastry, rich melted cheese, and herbaceous, deeply flavored onions.

This is just one of many show-stopping appetizers sure to turn heads at the party. No one will even suspect that it’s made with everyday ingredients, like:

Yes, you need both. Butter infuses the caramelized onions with an irresistible flavor while olive oil prevents them from burning.

Chopped onions are caramelized, then topped on the wheel of brie before being baked. Now, the most important rule when caramelizing onions is to be patient. They’re sauteed over medium heat until they become a rich, deep brown color. This can take up to 45 minutes.

Brown onions are my go-to onions here. However, you can use white, red, or sweet onions instead or even shallots.

While salt helps to bring out the flavors of the onions, it also plays an important role in caramelizing them. Adding salt at the beginning helps to draw out the excess moisture and helps the onions to brown evenly.

All three are stirred into the onions, helping them shine.

Head to your local grocery store (or your local cheesemonger if you've got one!) and pick up a wheel of double cream brie. This is a soft cow’s milk cheese from France that’s a popular addition to meat and cheese boards, crostini appetizers, or baked with toppings as a simple and quick appetizer. It’s deliciously rich, creamy, and slightly nutty.

This is a light and flaky type of laminated pastry. It’s extra buttery and rich thanks to layers of butter folded into the dough. Once it bakes in the oven, the many melt-in-your-mouth layers puff up and become light and crispy.

One sheet of puff pastry is enough to wrap the wheel of brie. The leftovers can be kept in the freezer or thawed in the fridge to use for Pigs in a Blanket or Pear and Goat Cheese Tarts.

If you’re up for the challenge, you can learn how to make homemade puff pastry. However, buying it from the freezer section of your grocery store is much easier and quicker for a simple appetizer!

Egg wash is made by whisking an egg with water or milk. It’s brushed on the outside of the pastry and, when baked, the proteins in the egg give the pastry a beautiful golden shine.

If you have an aversion to eggs, feel free to omit them and brush the pastry with milk or cream instead.

How to make baked brie with caramelized onions in puff pastry

Learn how to make baked brie in puff pastry using these step-by-step instructions:

Step 1: Melt the butter and olive oil in a large skillet over medium heat, then add the onions and salt.

Step 2: Cook the onions until they're dark brown and caramelized. Finish by stirring in the thyme, garlic, and black pepper.

Step 3: Place the puff pastry on a parchment-lined baking sheet. Place the wheel of brie on top of the dough, then top with caramelized onions.

Step 4: Fold the dough edges up and around the brie and onions. Brush the egg wash on each part of the dough that folds on top of itself.

Step 5: Once the dough is folded around the brie, brush it all over with the egg wash.

Step 6: Bake the brie until the puff pastry is evenly browned. Let it rest for 10 minutes out of the oven, then serve!

Keep these helpful tips in mind before putting the baked brie together:

The onions will begin to stick to the pan around the 25-minute mark. When this happens, deglaze the pan with a splash of water, Marsala wine, chicken or vegetable broth, bourbon, or beer. Scrape up all the bits that are stuck to the bottom - that’s where the flavor is! You'll probably need to do this a couple times during cooking!

Keep the rind on the cheese

A wheel of brie is surrounded by a bloomy edible rind. I recommend keeping the rind intact rather than cutting it off. If there are any holes in your pastry, the rind will prevent the cheese from oozing out.

Keep the pastry in the fridge

Puff pastry dries out very quickly. Before you make this recipe, keep the sheet of thawed pastry in the packaging in the fridge to avoid it being exposed to the air. If you need to keep the pastry out of the fridge, cover it with a damp kitchen towel until it’s time to wrap the cheese.

Use the right baking dish

Baked brie appetizers can be messy. It’s best to bake them in a rimmed baking sheet, small cast iron skillet, or pie dish to avoid a mess. Either serve the cheese and pastry directly in this dish or transfer to a serving platter when it’s done.

Pair the brie in puff pastry with plenty of snacks for dipping, such as:

Can you make it ahead of time?

There are three ways to save time here: 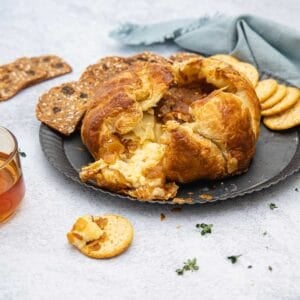 Did you make this recipe?Share a pic and tag @cupofzest and use #cupofzest so I can see it!
« Baked Brie in a Bread Bowl with Garlic