Treat yourself to zesty and smoky loaded chicken nachos

If you’re like me, then you absolutely love nachos and can never get enough whether they’re served as a party appetizer or main dish. If I’m hosting friends for cocktails and conversation or on game day, I’ll always serve a platter of Vegetarian Nachos with Paloma Cocktails on the side. What more could you need for a flavorful and fun feast?

You’ll find all of the fun flavors of fajitas on the loaded tortilla chips. They’re also perfect for serving a crowd! Serve them next to my Spicy Queso Dip and Jalapeno Greek Yogurt Dip for a snack night you and your friends won’t ever forget.

What are chicken fajitas?

Chicken fajitas are almost always on the menu at Tex-Mex and Mexican restaurants. They’re a fun and filling meal featuring strips of seared chicken and sauteed peppers and onions. The two are layered together in warm tortillas and loaded with even more toppings, like shredded cheese, guacamole, salsa, and sour cream.

What do you need to make homemade nachos?

​​The simple ingredients in this nacho recipe feature bold flavors that mimic your favorite restaurant chicken fajitas. This is what you need:

The chicken breasts are cut into small pieces and tossed with flavorful Mexican-inspired seasonings before being quickly pan-fried on the stove. The pieces stay nice and juicy when baked on the nachos so you never end up with dried-out chicken. Chopped boneless chicken thighs can be used instead of chicken breasts and will add richness to the nachos.

Need your nachos in a hurry? Make them with the leftover cooked chicken that’s already in your fridge or run out to the store for a rotisserie chicken. Just season the shredded pre-cooked chicken with the seasonings and throw them in the pan with the peppers before topping them on the nachos.

When making chicken fajitas, the raw chicken is usually seasoned or marinated before being cooked. I opted for a simple homemade fajita seasoning with tang, zest, and smoky flavors. For this, you’ll need fresh lime juice, salt, chili powder, cumin, dried oregano, and smoked paprika.

It’s unlikely that you’ll ever see a fajita recipe without sauteed peppers and onions! They’re a must for the right texture, flavor, and flare when loaded into a tortilla with the meat. Even though the recipe calls for red bell peppers, you can use any color you already have at home.

A must for any nacho recipe! Make sure to use a sturdy chip that can hold the weight of all that cheesy goodness.

If you’re looking for the best cheese to melt on top of your nachos, it has to be Monterey Jack. Bon Appetit agrees! Monterey Jack is a firm, shreddable cheese that melts beautifully and tastes so creamy.

You could also use shredded mozzarella, pepper jack, or cheddar instead. Whatever you do, make sure to shred the cheese yourself to avoid the not-so-great anti-caking agents in store-bought shredded cheese.

Once the nachos are out of the oven and ooey-gooey, they’re topped with guacamole, sour cream, and cilantro to enhance the already delicious flavors. If you’d like to add even more, feel free to pile on green onions, sliced jalapenos, pico de gallo, hot sauce, or black olives.

How to make chicken fajita nachos

These fajita nachos involve some prep before you begin layering, but the finished result is so worth it. Here’s how it’s done:

Step 1: Add the raw chicken in a bowl with the spices. Stir to combine.

Step 2: Saute the bell peppers and onions in a skillet until charred and softened.

Step 3: Cook the chicken in the same pan until browned and cooked through.

Step 4: Spread the chips in an even layer on a baking sheet. Sprinkle half of the cheese on top.

Step 5: Add the chicken, peppers, and onions on top.

Step 6: Sprinkle the rest of the cheese on the nachos.

Step 7: Place the nachos under the broiler in the oven until the cheese is melted and bubbly.

Step 8: Add the cold toppings on the nachos, then serve and enjoy!

Can you cook fajita nachos in the microwave?

Cooking nachos in the microwave is a great solution if you’d rather serve individual portions or don’t want to turn on your oven.

Simply layer the nachos on individual dinner plates and microwave them one at a time until the cheese is bubbling. Top with cold toppings and enjoy.

What’s the best kind of chicken for chicken nachos?

Boneless, skinless chicken breasts or thighs are best for chicken nachos because they pan-fry quickly and when seasoned properly can add lots of flavor.

Ultimately, use whichever cut of chicken you have on hand or prefer when making nachos.

Can you make nachos ahead of time?

I don’t recommend it. Nachos are always best when they’re served straight out of the oven when the cheese is still gooey and melted.

You can prep the ingredients ahead of time. Cook any topping that need to be cooked, like the chicken and peppers in this recipe, grate the cheese, chop any toppings and store in the refrigerator until ready to make the nachos! 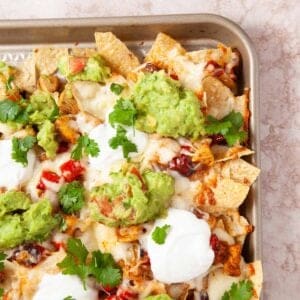 Did you make this recipe?Share a pic and tag @cupofzest and use #cupofzest so I can see it!
« Blue Lagoon Mocktail (4 Ingredients!)
Five Tips to Hosting a Cocktail Party at Home »